Wong Kar-Wai left his native Shanghai at the age of five for Hong Kong. He obtained a degree in graphic arts in 1980 and took a directing course organised by Hong Kong television. He then became an assistant director on various television series.
At the same time, Wong Kar-Wai developed his talents as a screenwriter and left television in 1982 to become a film director. He wrote ten screenplays over the next five years and in 1988 directed his first feature film As Tears Go By, which made him Hong Kong’s most outstanding filmmaker. 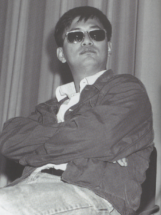