Born in Venezuela in 1981, Tomas Espinoza has a Bachelor of Social Communications and Cinema. Since 2004, he has lived in Buenos Aires, Argentina, where he studied cinema at the Centro de Investigación Cinematográfica. He has worked on many commercials as production assistant, director’s assistant and post-production assistant. Currently, he is a producer with Disney Channel Latin America. He is developing his first feature film, Harpoon. 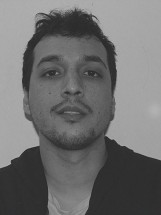