A signed but otherwise blank letter of authority upon which I could superscribe what I want : unconditional terms, unlimited authority, full discretionary powers. This is what the dictionary told me a carte blanche was.
So, where to begin ? Well, Japanese film was my subject. I have lived in the country for our fifty years, had written a number of books about Japanese cinema, am considered an authority. But even within this limited space the problem of choice – one hundred years of film – was large.
It could have been larger, to be sure. But most pre-WWII movies are gone – destroyed in the 1923 Kanto Earthquake, burned in the 1945 destruction of Tokyo, lost through decades of industrial neglect. Just a few titles remained from half a century of filming and this considerably simplified my choice. Even so, what would my criteria be, I wondered. Artistic, the best ? But the best remaining Japanese films have now been seen by everyone, over and over again. Historical importance? Allright, but so what. Socio/anthropological relevance ? My heart sank.
All right, then. My favorites? But this not only meant showing what was already known (how could I leave out Tokyo Story from my favorites, or the final reel of Seven Samurai ?) but also introduced a certain ambivalence. To like something does not necessary mean to approve of it. And to approve of something does not always include liking it.
For example, I like seedy, stereotyped Nikkatsu roman-porno sit-coms, but I couldn’t approve of them on any grounds but those of high bad taste. And I approve of the historico-intellectual musings of Yoshishige Yoshida but I don’t really like them.

Finally, I decided that the only criterian I could trust was one over which I did not have control. I would pick pictures which I had – for whatever reasons – never been able to forget.

This category was also too large but at least it did not contain those examples which would not have fit it. I had already forgotten them. So, my blank carte blanche in front of me, I began to remember.

The result is compromised. Sometimes prints (Susumu Hani’s A Full Life) were not to be found ; sometimes available prints (Shinoda’s Assassination) were not in good enough condition. And, to be sure, many times those films I remembered best were just too famous to be shown again to an audience which had already seen them.

So, slowly, the choice narrowed. The remaining twenty films, those which now fill my carte blanche, gradually grouped themselves on the empty page and now stand there as testimony to something or other. Memory, certainly, for the Proustian quality of cinema is well documented – though Marcel did not think too highly of the movies. Beyond that one may glimpse some indications of a distant agreement between the means of the film and the ends of me. I can trace some of these choices Sisters of the Gion and Humanity and Paper Balloons are there because I always admired (beside their brave, liberal attitudes) their unforgettable perfection of shape. The parallels with the stories and the parallels of the space and time in which they occured remain in the sharpest focus. In others, even if the content was a bit conventional (as in Japanese Girls at the Harbor), the form was so original that the sheer aesthetic pleasure of perceiving structure was never to be forgotten. When a perfection of formal narrative means is coupled with a narrative itself worth narrating, then the results are even more memorable. Among the many choices offered by Ozu I chose two versions of the same anecdote – the 1934 Story of Floating Weeds, and the 1959 Floating Weeds – because different answers were found for the same proposition. The very banality of the narrative required a narrative brilliance. That Ozu could make two pictures so similar, so different, so rigorous, and so right, made me want to compare them, and to commemorate them. (Which is why I am giving a lecture right in the middle of their successive showings.)

Kinoshita’s Snow Flurry famously lost its original 1959 audience with its abruptly non-chronological chronology. Seen now (after many more advanced narrative experiments) it does not lose its audience but those of us who first saw it forty years ago will never forget it. We may now find the subject sentimental but the narrative remains rigorous.

More difficult still is a film such as Imamura’s A Man Vanishes, a “documentary” which turns into a commercial feature film, which has no conclusion (it does not end, it stops) and which never completes the task it set for itself. Jun Ichikawa’s Dying at a Hospital makes no concessions at ail. No close-ups, no “story”, long, long shots intercut with lyrical sequences the protagonists will never see. Okaeri is difficult as well – its “story” is never stated. It must be inferred, and the climactic scene is a fourteen-minute cut with only one person and a door in it. Yet these films are not only worth the effort they require (all have enormous emotional pay offs), they ensure that you will never forget them – as indeed I never have.

Other reasons for remembering films include the sheer pleasure they give – their stories, to be sure, but also the transparent carpentry of their construction. Naruse’s Repast is made of very little – a couple, a house, the entryway, the path outside – and from this is crafted a box which precisely fits our emotions. Kawashima’s Not Long After Leaving Shinagawa makes us a larger box, a whole inn, but one no less expertly carpentered, and with many a secret drawer. And Kon Ichikawa’s Bonchi is series of boxes within boxes each containing dazzling images (the Japanese toilet gleaming like an antique vase, the family meeting in a composition so delicate one could watch forever).

Sometimes it is a character, an actor, an actress, who is unforgettable. I would probably still remember Sweet Sweat, no matter who played the lead, since Toyoda is such a fine director, but Machiko Kyo is in this film so riveting that she has been living inside my head now for over thirty-five years, since 1964.

(The only person living their longer is Mie Kitahara in Crazed Fruit, a picture too well known to warrent another festival showing, and in any event her place in my head was not based on her acting talent – as it is with Machiko Kyo – but simply her person itself.)
Something of the same is true of Ryuji. This is a genre film (rise and fall of small-time hood) pulled to unforgettable heights by its actor, Masaji Kanedko – also the script writer and the real power behind the camera, though the film had a perfectly good director, Hide Kawashima. That Kaneko died (cancer, age thirty-three) one week after the film opened, that the film was never widely shown, and now remains known only to aging enthusiasts adds considerably the memorability – but it is the electricity of this performance which defies its ever being forgotten.

And sometimes it is the way that a film encapsulates its era that preserves memories. In my list I notice that the majority of pictures are from the Sixties and early Seventies. This was a time of dissent, of experimentation, of questioned values. New directors were appearing, new themes, new freedoms.

Hani’s The Inferno of First Love captures this era and its values, but so does a commercial film like The Hoodlum Soldier. They share the climate of revolt and unforgettable illustrate at – as in the fight in the bath-house in the Masamura film : cogs in the military machine, these naked, natural soldiers suddenly become human.
Teshigahara’s still utterly unappreciated Summer Soldiers also showed the military in revolt – US Soldiers AWOL’s from the Vietnam War. Directed by a non-commercial artist, written by translator and biographer (John Nathan), starring amateurs, the very integrity of the film worked against its being widely shown, but it can never be forgotten.

One of the last and one of the most perfect of the films of revolt was Yanagimachi’s The Plan of a Nineteen Year-Old which shows what happens when a lowly newspaper boy goes off the social rails. Though the director went on to make more perfect film (Fire Festival for example) he never made a more memorable statement. The script and original novel were by the late Kenji Nakagami, from Japan’s socially proscribed caste, the lead actor was an amateur, a hot-rodder, and the crippled woman was an actress who had crippled herself in just the way the story describes.

The result is a kind of strangeness. This is something that ail these films share. A playwright (Shuji Terayama) makes his single commercial film(Boxer) for the most obtuse of the majors (Toei).
It sinks without a trace but its oddness, its privacy, means that whoever saw it will never forget it. A cinephotographer (Toichiro Narushima – Double Suicide, Merry Christmas Mr. Lawrence) makes his single feature film (Time with Memory) and it is so odd, so private that even its mistakes (Mother’s bones are plastic) are memorable.

Actors, writers, photographers, commercial-film directors these ail share, I now see, that quality which I have called memorable but which has other names as well: personal, honest, principled. What you remember forever is when you are addressed directly and told a truth.

We all have our truths and these twenty films contain mine. Returning to the dictionary, I just found that there is a second definition of carte blanche, one I had overlooked – in piquet, a hand containing no king, no queen, no jack. That doesn’t apply to my carte blanche at all. My hand holds only winners. 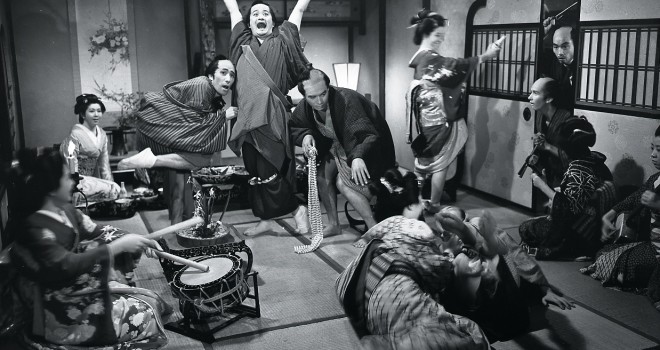 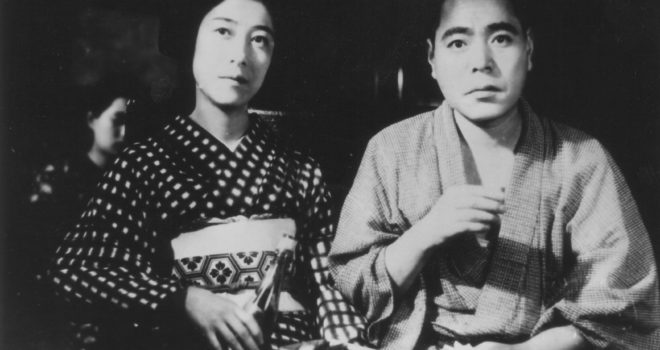 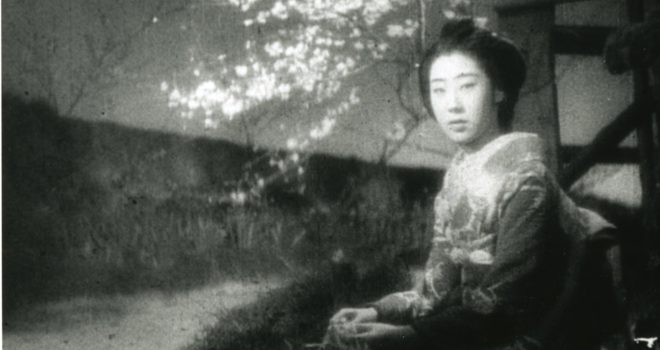