Born in 1978, Hamaguchi Ryûsuke studied at the Graduate School of Film and New Media at Tokyo University of the Arts where he graduated with a Master in Film. Passion, his graduation film, was selected at San Sebastian in 2008 while The Depths (2010) was screened at TOKYO FILMeX. He then co-directed the series of documentaries Tôhoku Documentary Trilogy with Kô Sakai from 2011 to 2013 before directing two fiction features, Intimacies (2012) and Touching the Skin of Eeriness (2013). Selected in competition at the Festival des 3 Continents 2015, Senses (Happy Hour, 2015) won the Montgolfière d’Argent and the Audience Award. Asako I & II (2018) was presented at the 2018 Cannes Film Festival. His last film Drive My Car (2021) won the Best Screenplay Award at Cannes in 2021. 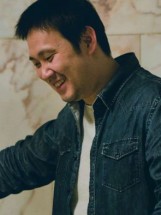 Wheel of Fortune and Fantasy
(Guzen to sozo)
by Ryûsuke HAMAGUCHI