Yang Zhengfan was born in 1985, China. After graduating from law school, he co-founded Burn The Film in 2010 with Zhu Shengze. His debut feature Distant (2013) premiered at the Festival del Film Locarno and screened internationally at the Vancouver IFF, Warsaw FF and the 3 Continents Film Festival in Nantes, among others. His second feature Where Are You Going (2016) premiered at the Rotterdam International Film Festival and received the Jury Award at the China Independent Film Festival. He is also the producer for Zhu’s two documentary films: Out Of Focus (2014) and Another Year (2016). Yang is currently developing a fiction film, The Stranger, which received support from the Hubert Bals Fund and is the last part of The Outsider Trilogy. 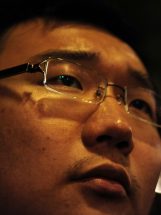