A Sudanese filmmaker, born and raised in UAE. Studied media at UAE University, worked as a film and documentary director. As a producer and director He made several of short films that shown at film many film festivals, films such as “Slump on Cannes roads” “Teena” “Coffee and Oranges”, “Feathers of the Birds” that considered at 2005 as a return for the cinema in Sudan, his last short “Studio” that mentored and supervised by Iranian director Abbas Kiarostami on 2013 screened on 13 festivals and won jury Award on Luxor African film Festival, He received the Best Arabic Theater Script play award from the Arab Authority for his play “Apple Pies”. Now he’s the Head of Programming Committee on Sudan Independent Film Festival. 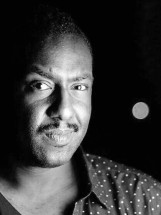