Garin Nugroho was born in Jogjakarta, Indonesia in 1961. He studied at the film academy in Jakarta. He was selected as the Best Young Director at the Asia Pacific International Film Festival for his debut film, Love Is a Slice of Bread (1991). His Opera Jawa (2006) won awards in Tokyo, Philippines and Singapore. 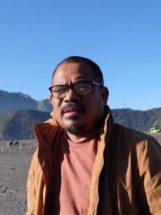 Memories of My Body
(Kucumbu Tubuh Indahku)
by Garin NUGROHO