Hong-Kong : Wai, a Chinese girl of 15, realises that autumn exists between summer and winter. On the ceiling of the room, above the computer, a traditional paper craane hangs. Through the door slightly ajar, Wai can see her family preparing the trunk sfor the long voyage : emigration to Canada. Tokio, a Japanese man, arrives in Hong-Kong, filming ail that he sees and recording his verbal impressions on the differences between his country and his own. He’s in Hong Kong to discover the pleasures of Chinese cooking. He meets Wai while fishing and talks with her in English. To satisfy his curiosity about good eating, Wai takes Tokio to MacDonald’s… That’s where she celebrates her birthdays, and she won’t admit that all fast foods restaurants are the same everywhere. Wai then takes Tokio home, where only her aged grandmother remains. Tokio runs into the sister of his first wife. They end up making love. Wai takes a trip to an island with the boy she loves and discovers the pleasures and pains of love.. 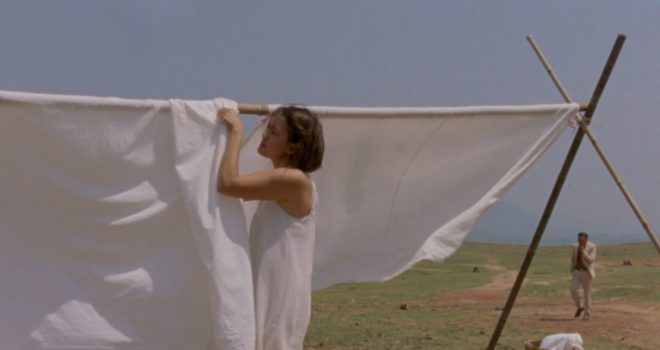