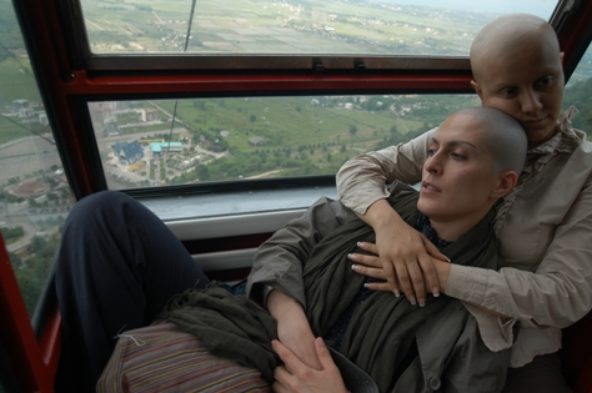 In this sequel to Abbas Kiarostami’s Ten, Mania Akbar, the leading actress of the film, again drives a car and talks to her son, her sister and other people. Her situation in this sequel differs because Mania is suffering from cancer. As the disease progresses she’s unable to drive. So she sits in the back of the car and the conversation continues. She becomes weaker through her illness and unlike Ten, the camera for 10 + 4 has to follow her wherever she goes. This is a totally new experience in which the director is being directed by her cancer in the process of making the film.

It has been four years since Kiarostami made Ten. In that time, the film’s main actress has shot a documentary as well as a fiction film that was awarded a top prize at the Venice digital film festival. In 10+4, the director adopts Kiarostami’s technique from Ten to deal with illness, her illness. Abolishing the borders between documentary and fiction, the film goes through a philosophical shift by describing the transformation of the relationship with life, feminism and the struggle for freedom that were the issues tackled in Ten. The director’s cancer launches a new series of existential journeys: aggression is replaced by tenderness, solidarity by solitude, courage by concern, the scandalous beauty of a woman’s shaved head by the disfigurement caused by the medical treatment. While 10 + 4 appears as a sequel to Kiarostami’s masterpiece, its director goes far beyond the original framework to allow in silence, pauses and songs rather than speech. Another way of showing how life goes on.