Born in Paraguay in 1981. Renate Costa Perdomo wrote and directed her first film Cuchillo de Palo, which was world-premiered at the 2010 Berlinale, awarded various international prizes at festivals and produced by Marta Andreu. In 2012, she co-directed Resistente with the Finnish director, Salla Sorri. Resistente was world-premiered at the 69th Venice International Film Festival Horizons section, being the first Paraguayan short film to compete in La Biennale. In 2013, she founded an international workshop for directors and scriptwriters held in Paraguay with prestigious filmmakers such as Lucrecia Martel, Paz Encina and Violeta Bava. As a producer, she worked on Cándido López, los campos de batalla by José Luis García (Argentina 2005), collaborated on Ixcanul by Jayro Bustamante (Guatemala, to be premiered in 2014) and she is developing Into the Dust by Federico Adorno. 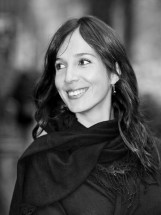