Jenna Bass (b. 1986) is a South African writer, filmmaker and ex-magician. An alumnus of the Focus Features Africa First Short Film Program, her Zimbabwe-set short film, The Tunnel, premiered at the Sundance and Berlin Film Festivals and continues to screen internationally. In 2013, Jenna shot and self-produced her nano-budget directorial debut, Love The One You Love, and is currently developing her second feature, Flatland, a feminist Western, as well as several other projects. 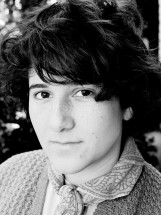