Sompot Chidgasornpongse graduated with a Bachelor’s degree in Architecture from Chulalongkorn University, and a Master’s degree in Film/Video from California Institute of the Arts (CalArts).

His films explore the possibility of representing everyday life in a creative, critical and thought-provoking way. They have been shown at various international film festivals around the world, such as Oberhausen, Rotterdam, Viennale, Visions du Réel, etc. His first documentary feature, Railway Sleepers, had its world premiere in the Documentary Competition at Busan International Film Festival and its European premiere in the Forum section at Berlinale. He is also a Berlinale Talents and Talents Tokyo alumnus. Sompot has also been working closely with Apichatpong Weerasethakul as assistant director on many films, including Tropical Malady, Syndromes and a Century, Cemetery of Splendour and most recently Memoria. He is now based in Bangkok and is working on his new feature film, 9 Temples to Heaven. 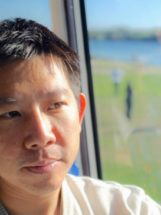