Irfana Majumdar is the founding Artistic Director of the NIRMAN Theatre and Film Studio in Varanasi, India. She studied Performance at the University of Chicago, and has been awarded fellowships for her commitment to themes of social justice and process of collaborative creation. She now directs and teaches, creates solo performances, and program arts events, residencies, and internships. She has directed three documentaries. Shankar’s Fairies is her debut film. 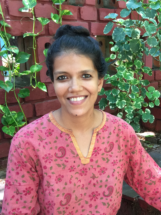