Aditya Vikram Sengupta’s debut film Labour of Love, premiered at the Venice Film Festival 2014, where it won the FEDEORA for Best Debut Film. His second feature Jonaki was officially selected at the International Film Festival of Rotterdam 2018.  Once Upon a Time in Calcutta was the first ever Bengali language feature to be a part of Cannes Cinéfondation’s L’Atelier at the Cannes Film Festival in 2016. 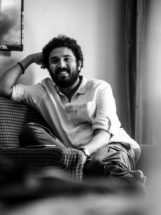