Born in 1977 in Tajikistan. He graduated from Tajik State National University, Faculty of Economics and Management in 1999. From 2000 to 2006, he worked at Tajikfilm film studio as economist and later as head of the production department. In 2006, he started his career as producer with Art-Vision LLC. He produced more than 20 documentaries and two feature films (Ovora and Let It Be a Dream). He is also production manager for international film projects: Buzkashi! (Oxus Films, Canada) and 40 Days of Silence (Volya Films/Petit Films, France/Netherlands/Germany). He is now producing the Tajik feature film directed by Daler Rahmatov Dad, Mum, My Younger Sister and Antalya. 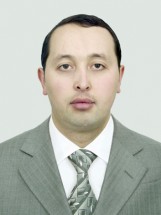