Jean Meeran lives in Cape Town and is a co-member of the film and art collective, Team Tarbaby. He has a film MA from UCT and NYU with residencies at the Binger Institute and a Hot Docs Blue Ice Fellowship. Awards include the Best Pitch at the Sithengi Film Market in 2001 (P-I-G) and the Newcomers Award in 2005 (Katechetik), the AVA Award 2007 (The Brown Europe Pageant/Round One) and IDFA’s most Promising Documentary and Paris Project Awards DFM 2013. He has screened at ZIFF 2005, DIFF 2006/2012 and IFFR 2005. He developed his fiction screenplays with DV8 (The Concubine, P-I-G), the SABC and Binger Lab (Gazelle911) and Flying Moon Filmproduktion (P-I-G). He is currently also producing the fiction feature, Riot Waif, with Zinaid Meeran and the documentary, Waithira, with  Eva Munyiri. 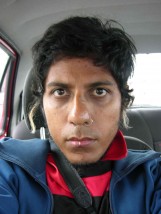