Born in Trinidad, Bolivia, on February 9, 1982. Juan Pablo Richter has directed more than 10 short films and worked on 25 other short films as Director of Photography, Producer, Screenwriter and Editor. He directed the short film The Last Step (2012), which was selected for the 2013 Short Film Corner of the Cannes Festival and won the Best Bolivian Short Film at the Fenavid International Festival in Santa Cruz, Bolivia. The Last Step also won the second place prize for the Best Short Film at the Eduardo Abaroa Plurinational Award in Cochabamba in Bolivia and the Best Photography at the Third International Short Film Week in Cochabamba, Bolivia. His first feature film Casting was in the official selection of the “Buenos Aires Red Blood” International Film Festival in Argentina. 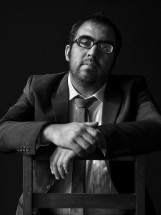