Jean-Luc Habyarimana is a Director/DoP based in Kigali, Rwanda, and has been attached to Almond Tree Films Collective since 2006. He attended the 2014 Berlinale Talents, where he was part of the Editing Studio. As DoP, he worked on Behind the World directed by Marie-Clementine Dusejambo (2014) and Maibobo directed by Yves Montand Niyongabo (2009), which was premiered at the Rotterdam IFF in 2010 and awarded at the 2011 Festival Cinema Africano d’Asia e America Latina in Milan, Italy. Jean-Luc Habyarimana directed SAA-IPO (2010), shot in Kigali, Rwanda, funded by Tribeca Film Institute, premiered at the 2011 Tribeca FF and screened at the 2011 Durban IFF (South Africa) and AfryKamera IFF (Poland) in 2011. 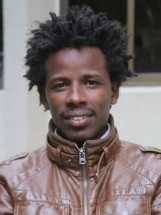