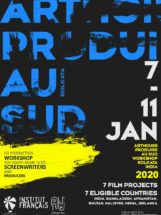 « The idea of a new professional industry event came up naturally last year in 2018. French Produire au Sud workshops expertise could be the right label to help film writers and producers to get new partners, new options for their film development.Besides the aim to enlarge the Arthouse Asia Film Festival professional proposals to regional professionals, the idea of sucha workshop is to create a vibrating and efficient place within the region to help film professionals to meet all together and to facilitate and fasten collaborations and potential co-productions.
In almost all South Asian countries there is no support infrastructure to support Arthouse filmmaking, neither in terms of funding nor in terms of training of film writers and producers.

The Arthouse PAS Kolkata workshop is a joined initiative by A2F2 of Kolkata and Produire au Sud workshop from 3 Continents FF, and supported by French Institute and French Embassy in India (represented by french audiovisual attache Pierre Laburthe) and French Alliance in Kolkata.

The film directors and producers from the following countries were invited to submit their film project:
India, Bangladesh, Afghanistan, Buthan, Nepal, SriLanka, Maldives.

Dates and selection for 2020 workshop

The workshop will be held in Kolkata January 7-11, 2020.
7 fiction features in development have been chosen for this 1st edition of the workshop:

I, THE SONG – Bhutan
by Dechen Roder and produced by Thinley Choden

The Produire au Sud workshop will be run by international professionals:

Training staff will be composed by producers, distributors, international sales people, scriptwriters, chosen from among the experts and consultants familiar with Produire au Sud, and from other Arthouse Asia professional partners who share its approach.

5 days of intensive training which will conclude with a public pitch presentation of the projects in front of a panel of indian and foreign producers, of distributors and managers of regional funds.